Today's post focuses on the "strong" elemental spells that the wizard attains when he retrieves the second gem for an element.  "Strong" spells require the wizard to build up elemental power before casting so timing is important, though the wizard can still move at a somewhat reduced rate while channeling an element.  These secondary spells add some of the heaviest damage attacks as well as the four elemental forms which provide incredible utility.

Big Fireball (Attack)
The aptly named big fireball makes a lasting impression.  On impact it detonates sending smaller fireballs in every direction so you can be sure there is plenty for everyone.  Luckily your bonus fireballs don't hurt you!

Fire Elemental Form (Defense)
Take on the elemental form of fire and blaze your own trail (literally)!  In fire elemental form you can move faster than ever before and can pass through flames without being hurt.  Plus you leave a fiery mess behind you and who wouldn't want that?

Ice Block (Attack)
Sometimes you just want your enemies to chill.  A lot.  Freeze them in a block of ice and enjoy a few moments of leisure time or maybe slide them into a hole if you are in a hurry.  Also makes for a handy moveable wall!  The uses are endless!*  (* uses are not actually endless)

Water Elemental Form (Defense)
Take on the elemental form of water and go with the flow!  In water elemental form you can walk on water and you leave an icy trail behind to slow your foes.  Just be sure you make it back to dry land before you take an unintended dip in the deep!

Stone Fist (Attack)
The stone fist hits like a bomb and will send all but the toughest of foes sailing back!  As an added bonus it can smash through some walls and make ice blocks into a million ice cubes.  Now you have a reason to yell: "Stand back, I'm making daiquiris"!

Earth Elemental Form (Defense)
When the going gets tough you may need to get tougher.  Like rock tough.  In earth elemental form you can walk through anything, which can be like, super handy sometimes.

Air Elemental Form (Defense)
When you absolutely have to get over that giant chasm today air elemental form is your go to spell.  Become a happy little cloud and float away like you always wanted to.  Just remember you stop floating when the elemental form expires.

That wraps up our tour of the "strong" elemental spells.  Be sure to check out the standard elemental spells in the last post if you missed it.  Of course all of this is subject to minor revision as we go but for the most part I think the sixteen elemental spells are pretty much ready for puzzle solving and enemy defeating.  Cheers!

Posted by Zack Radick at 8:52 PM No comments:

The titular Elementalist is a wizard who specializes in elemental magic; specifically the four primary elements: fire, water, earth and air.  At the outset of the game the wizard has lost much of his power (I know, shock!) and must regain it by recovering the elemental gems for his wand.  This gives players a chance to gain mastery of the game systems as they progress.  For each of the four elements the wizard will eventually master four spells, bringing the total to sixteen eventually (not to mention the sixteen items currently implemented).  This may sound overwhelming at first but it becomes elemental in no time (puns are always free)!

The spells are somewhat loosely categorized as "offense" and "defense" and include both a "basic" and "strong" version.  In order to cast the "strong" version the wizard must already have attained the second (and of course larger!) gem for the given element.  Today I want to give a quick preview of the "basic" spells for the four elements.

Fireball (Attack)
Very few spells are as basic and still satisfying as the old stand-by fireball.  This no-frills spell is sure to leave your enemies hot under the collar and has the added benefit of lighting up some of the scenery in the process.  Don't leave home without it.

Bonfire (Defense)
Bonfire may technically count as a "defensive" spell but don't let that fool you, some enemies really are stupid enough to walk right into this party.  Bonfire can also pass through some semi-solid objects and be a Really Useful Engine Spell.

Iceball (Attack)
Put the lights out on your foes or just the chandelier with an ice ball.  Capable of flying long distances and landing with a wet smack, the ice-ball lets your enemies know that you can be as cold as ice (and you're willing to sacrifice).  When combined with a fireball you can keep yourself endlessly entertained*! (*not actually guaranteed)

Wave (Defense)
Nobody knows who started the wave, but we can all agree that it is hard to stop once it gets going.  This wave is good at putting out fires and pushing back the unwanted advances of shambling hordes who are all but putting a tic-tac in their mouths right now.

Rockball (Attack)
For those about to rock.  The simple rock ball attack is bound to be a hit with some of your enemies.  Also useful for hitting those out-of-the way switches that seem to be all the rage for some reason.

Stalagmite (Defense)
Erupting a stalagmite in front of you can be a handy way to stop incoming attacks or just make an obstacle for enemies interested in getting a bit too close.  And if your timing is right there are plenty of enemies who will not appreciate it bursting out of the ground to meet them.

Lightning (Attack)
Fast and furious (and amazingly rehashing the same tired formula over and over), the lightning bolt is capable of delivering a real jolt in a hurry.  I know, shocking, right!

Wind-Gust (Defense)
A brief burst of wind to propel you quickly forward and potentially over small gaps.  Wind gust really is the wind beneath your wings!

Alright, that wraps up the overview of the eight basic elemental spells.  If you are like me (god help you, I'm so sorry) you are already thinking of the many ways these could be used to overcome enemies and obstacles, solve puzzles, and generally infect your whole train of thought.  If not, I still hope you are intrigued and looking forward to seeing some of the "strong" elemental spells and additional items for the wizard to use.
Posted by Zack Radick at 9:05 PM 3 comments:


Several months ago when the sun was still shining over the streets of Northeast Portland I was showing the latest build of The Elementalist to one of my neighbors.  It was our annual block party and I had promised the year before to show what I was working on and failed.  So this year, with the kids a little older and able to fend for themselves somewhat I brought out my tablet and an XBOX 360 controller and was in the process of showing off.  After playing through the intro sequence and seeing some of the later content and tools I have made to build the game my neighbor asked me the simple question: "so, what is your next milestone?"

I really didn't have a good answer at the time.

I have been working on The Elementalist for over six years.  I have a Trello board to track my day-to-day work and ambition.  I have sketchbooks, notebooks, papers, design docs, and other paraphernalia of my process scattered hither and yon across my desk, desktop and home to remind me of what I want this game to be.  I have dozens of tabs in my favorite browser I don't dare close because they have some tool, tip, trick, or bit of arcane knowledge I know I might need to finally seal this project out of my consciousness for good.  But for all the trees in this development process it can be hard to step back and see the forest. 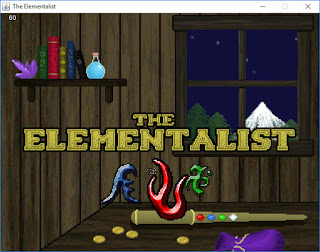 I began this project because I wanted to build a game that took the fundamental components that I love from the classic 2D games of my childhood and combined them with a dose of modern features into something original and yet familiar.  The Legend of Zelda remains one of the most important games for me and I wanted to blend that recipe of mystery, exploration, and progression with more complex puzzle and combat mechanics.  I wanted to make something that both my kids and I would want to play.

I knew my protagonist would be a wizard almost right away.  The combination of a relatively frail physical form with potent magical skills really fit my modus operandi and having a wide variety of abilities was a must for the puzzles that immediately started springing to mind.  I began sketching right away and writing text documents describing what the game would need architecturally.  It did not take long before I started my project under the inauspicious placeholder name "wizgame". 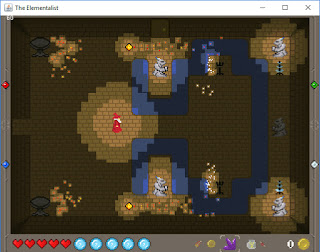 I wanted the game to be a strict 2D presentation with discrete rooms in the vein of the original Legend of Zelda but to include dynamic lighting and to scale to any resolution gracefully.  The first code I wrote was to prove out these specific design goals and once that was complete I knew I was ready to take the red pill and begin the real journey.

This is not my first game project and having been a professional software engineer for many years and a manager of software teams I knew what I was biting off.  I decided to start small.  Literally.

Once I knew I could make my UI scale seamlessly to fit any display the real question was what would I use for the native resolution?  I decided to start with 320x240 since it gave a good pixel-y feel to the display and was a native 4:3 ratio.  It sounds archaic and possibly masochistic but the truth is that it has been a really fun challenge to work at that scale (fun fact: the original NES ran at 256x240).  Every time I fire up the game as I develop I compare it in my mind to the legacy that inspired me and I like to think it is on the right path. 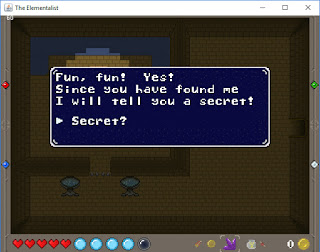 So, to get back to the original question, what is my next milestone?  Getting a playable alpha into as many hands as possible and getting feedback.  I have already started the Trello board with the last bit of "must-haves" for a public alpha and getting a blog up to discuss it with you all is another card that just got crossed off...  just a few more to go.

I am really looking forward to sharing the last part of this journey with you.